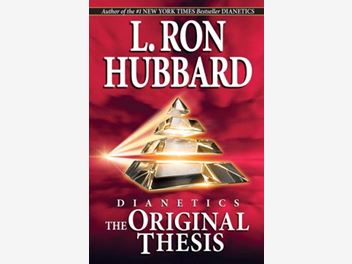 DIANETICS: THE ORIGINAL THESIS HARDCOVER Here is Mr. Hubbard’s first description of Dianetics. Originally circulated in manuscript form to a few friends, it was soon copied and passed hand-to-hand until it literally circled the globe. But the resultant word of mouth only fueled the fire. With thousands of letters requesting more information, he concluded the only way to answer all inquiries was with a book. That book was Dianetics: The Modern Science of Mental Health, now the all-time bestseller on the mind. Find out what started it all. For here are the bedrock discoveries and equations of Dianetics, including: - The Primary Axioms of Dianetics—axioms upon which the entire subject is built - The discovery of the Dynamic Principle of Existence that drives all life forms—SURVIVE! - The Four Dynamics by which life is compartmented and which determine one’s survival - The discovery and anatomy of the Reactive Mind - Engrams, the single source of all irrational behavior - The powerful command in every engram which prevented their discovery and handling before Dianetics - The Analytical Mind, its function and operation - The first description of the state of Clear, its attributes and potentials - And, most important, the Laws of Returning—containing the explanation of both how and why auditing works Here, then, are the fundamental breakthroughs Mr. Hubbard used to make the first Clears—breakthroughs which made possible the development of technology for use by every individual to begin the clearing of a planet, breakthroughs only contained in Dianetics: The Original Thesis. To purchase your copy of Dianetics: The Original Thesis hardcover online follow this link: https://www.scientology.co.nz/store/item/dianetics-original-thesis-hardcover.html

Ask the lister a question